Almost all users agree that the DJI Mavic Mini has comparable features to the DJI Mavic Air and DJI Spark, let’s look to see if...
More

If you are a big fan of Potensic drones, this buyer’s guide will help you choose the ideal drone for you as it covers Top potensic drones for 2020.

Potensic have been making high-quality smart camera drones for quite a few years and have a wide range of drones from mini toy drones like A20, A30 to smart camera GPS drones like D50, D60 or D80. In this lits we will cover Top Potensic drones for 2020 based on their caracteristics, users reviews and overall sales.

With a very appealing design and a body layout similair to the the famed DJI Spark drone , the Potensic Drone D50 comes with the latest image and video transmission technology, equipped with advanced 1080P FHD 5G Wi-Fi Camera, providing high resolution that help you capture every aerial moment.

Potensic GPS drone D50 also has more amazing functions, like follow me, altitude hold… and it provides a about 12-15 minutes’ stable flight with your kids and friends.

With the GPS positioning system, the drone can follow you and track your every move. Furthermore, the latest landing position of drone will be shown on map then you could track it and get it back. You will experience safest and most fun flight ever!

This means precise hovering position for smoother and steady controls that beginners will have an easy time learning how to fly a drone. Not just only that the Mirage Pro D50 drone makes it easy enough for beginners, it comes with a powerful 1080P HD camera that delivers quality aerial footage.

Inside the box, the Potensic Mirage Pro D50 drone comes with a remote controller, a battery, a set of propellers, a charger, a screwdriver, a propeller spanner, landing pads, and instruction manual. The drone has a body dimension of 13.2 * 9.6 * 4.8 inches which is around two times bigger than the palm of your hand. Potensic D50 is built and crafted with a hybrid of alloy and durable ABS plastic which gives it overall great durability. It is perfect for beginners because that makes the drone very hard to break on impact and that is a big plus.

The DJI Mavic Mini brings a few of the latest features not found on previous drones. The Mavic Mini also brings a new design, similar to the DJI Mavic 2. The other features include its new ultra-lightweight 249-gram body and 30 minute flight time.

Mavic Mini is the perfect name for DJI’s latest drone. Just like its larger Mavic siblings, it’s collapsible, with arms that unfurl to transform it in a couple of spring-loaded maneuvers.

When it comes to looks, this is a DJI product through and through. The color scheme is gray and dark gray, just like the Osmo Action and Osmo Mobile 3, and its front is adorned with a pair of ‘eyes’, nuzzled under a flat, beveled, angry-looking top-side. It’s one of the better-looking drones we’ve seen.

On the front of the Mavic Mini is the 3-axis stabilized camera. Out of the box, it’s shielded by a camera guard, which is removable when you come to fly it. On the back are an exposed microSD card slot, and a micro USB port for charging. Above these is the battery flap. Compared to the Parrot Anafi, whose SD card slot is tucked away under the battery, DJI’s design is much more convenient for frequent storage-swappers.

The Mini isn’t crash-proof, however; there are no obstacle avoidance sensors on its sides, front or back, as found on the Mavic Air. That said, there are a couple of sensors at the base to enable smooth landings, along with a battery meter, and a light, so that you can keep tabs on your drone in the air and keep it in line of sight, even at night.

The Mavic Mini’s arms are relatively slender, and we actually cracked one of ours with a 1.8-meter drop – while it still works perfectly, that’s something that wouldn’t have happened had the safety guards been affixed. If you’re a newbie, anticipate flying indoors, or know you’ll be flying in strong winds, it’s worth picking up the Fly More bundle to get the 360-degree propellor guard.

Unlike some other drone controllers, the DJI Mavic Mini’s doesn’t include a screen; instead it unfolds to hold an Android or iOS smartphone. Tucked away in its body are screw-on joysticks, so that when it’s collapsed the controller has a flat profile, and when opened out it delivers a traditional feel. 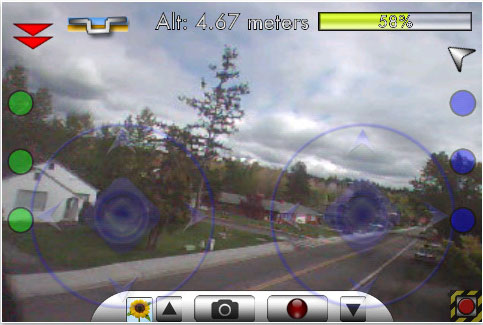 For those who want to control their Parrot drone through their phone, you’ll need a specialized Parrot drone app for that. It is obvious that choosing among the many drone apps available is very difficult as there are a variety of things to consider when installing a quality app to control your Parrot drone.

Drone Ace is an iPhone control app which offers more features than the typical drone app. Comparing it to AR Freeflight 2, they have similar options and controls, but Drone Ace takes a step further. With its affordable price and host of the feature-rich interface, many raves about the new app for Apple drone users.

The Drone Ace offers so many more controls than any other Parrot Drone app. You can find different modes to help control your drone excellently. Plus, you can combine your controls to use together, with up to 96 possible control style combos to find out how YOU want to fly.

Another unique feature the Drone Ace has is its Fling Joystick. The app supports the Ten-One Fling controllers for the iPad, so you have full control over the drone’s Fling controllers. It makes the drone easier to fly instead of using your screen and risking unexpected turns.

In this list, we have selcted the best must have apps for dji drones. There are many applications that extend the uses for your drone. The DJI Go app is okay, but it leaves much to be desired. These apps help your drone reach its full potential

4DJI Ground Station Pro, one of the best apps for dji drones

DJI Ground Station Pro was designed for professional drone users who want to create complex autonomous flight paths. It’s designed to make the process of creating these paths easier by automating it.

Through its clear, concise interface,complex flight missions can be planned with a few taps. GS Pro will thenautomatically take pictures at pre-set waypoints, providing the accuracyrequired for precision mapping.

We’ve put together this list of Top 10 drone apps for drone pilots. Whatever new drone photography skill you want to learn, there’s an app for it . These apps work for Mavic Pro and Mavic Mini, amongst many others. There are a lot of drone apps, in fact, and it’s hard to know which one to choose.

There are lots of apps available that claim to be drone simulators, but few of them are any good at simulating the real experience. Quadcopter FX Simulator is one of the Top 10 drone apps for drone pilots , because it does a very nice job of reproducing the feel and experience of flying a drone.

You get access to a number of viewpoints — including the ground — plus a normal camera on the drone and a stabilized gimbal.The controls can be customized and tweaked a lot, and models of a number of different sizes and types of drone are included.

If you pay $4.99 for the pro version, you get more flying locations and even more customization. Unlike the real thing, however, in this app, you just press a button to return to your takeoff point and repair your drone. The latest version also adds support for Google Cardboard VR for more immersive flying.

In this list, we have selcted the best must have apps for dji drones. There are many applications that extend the uses for your...
Read more
DJI free Apps

If you’re not completely happy with the DJI Go app, or even if you are, you should take a look at Litchi. It’s a...
Read more
DJI free Apps

DJI+ Discover has been updated to bring you the world of flying like never before. Connect with other pilots in your area to fly...
Read more
DJI free Apps

The DJI Phantom 4 is a very polished drone compared to its competition, and for those who've flown a quad before, you'll have no...
Read more

If you are a big fan of Potensic drones, this buyer’s guide will help you choose the ideal drone for you as it...
Read more
Drones Review

Almost all users agree that the DJI Mavic Mini has comparable features to the DJI Mavic Air and DJI Spark, let’s look to see if...
Read more
Drones Review

Holy Stone produced one of the most popular drones in it’s price range. F181 was released about two years ago and it achieved great...
Read more
DJI free Apps

The DJI Phantom 4 is a very polished drone compared to its competition, and for those who've flown a quad before, you'll have no...
Read more

For those who want to control their Parrot drone through their phone, you'll need a specialized Parrot drone app for that. It is obvious that choosing...
Read more
Parrot Free Apps

All Parrot drones come with a free app called FreeFlight Pro, which handles the basics of flight, providing on-screen controls and a preview of...
Read more
Parrot Free Apps

AR.FreeFlight 2.0 The Parrot AR.Drone 2.0 is without doubt the best choice if you want to have a good drone without spending hundreds of dollars...
Read more
DJI free Apps

It’s amazing how drones have become popular considering that they were only introduced to the consumer market in the early 2000s. And back then...
Read more

PhotoPills drone app for those who love photography. A must have app fro drones. No matter if you are a new user or with...
Read more
DJI free Apps

If you’re not completely happy with the DJI Go app, or even if you are, you should take a look at Litchi. It’s a...
Read more
DJI free Apps

https://youtu.be/rjvwJN-QaQY GoPro's Karma drone may have hit a few snags (the company recalled it after the first units it sold kept falling out of the...
Read more